The Consumer Price Index (CPI) rose 6.9% on a year-over-year basis, while prices excluding food and energy (core CPI) rose 5.0%, both measures at decades’ highs. Energy prices skyrocketed 33.3% year-over-year while food prices were up 6.1%. The only components of core CPI which experienced double-digit increases were, once again, used cars and trucks and new vehicles, up 31.4% and 11.1%, respectively. Shelter costs increased 3.8%, driven by a slightly elevated owners’ equivalent rent. The rent of primary residence, up 3.0%, remains largely in line with pre-pandemic trends.

The Fed is under pressure to ramp up monetary policy tightening, not only domestically but globally as the Internal Monetary Fund has called on the Fed to place greater emphasis on inflationary pressures and to speed up asset tapering. The Fed is on track to do just that, given Fed chair Powell’s recent comments that inflation can no longer be considered transitory. 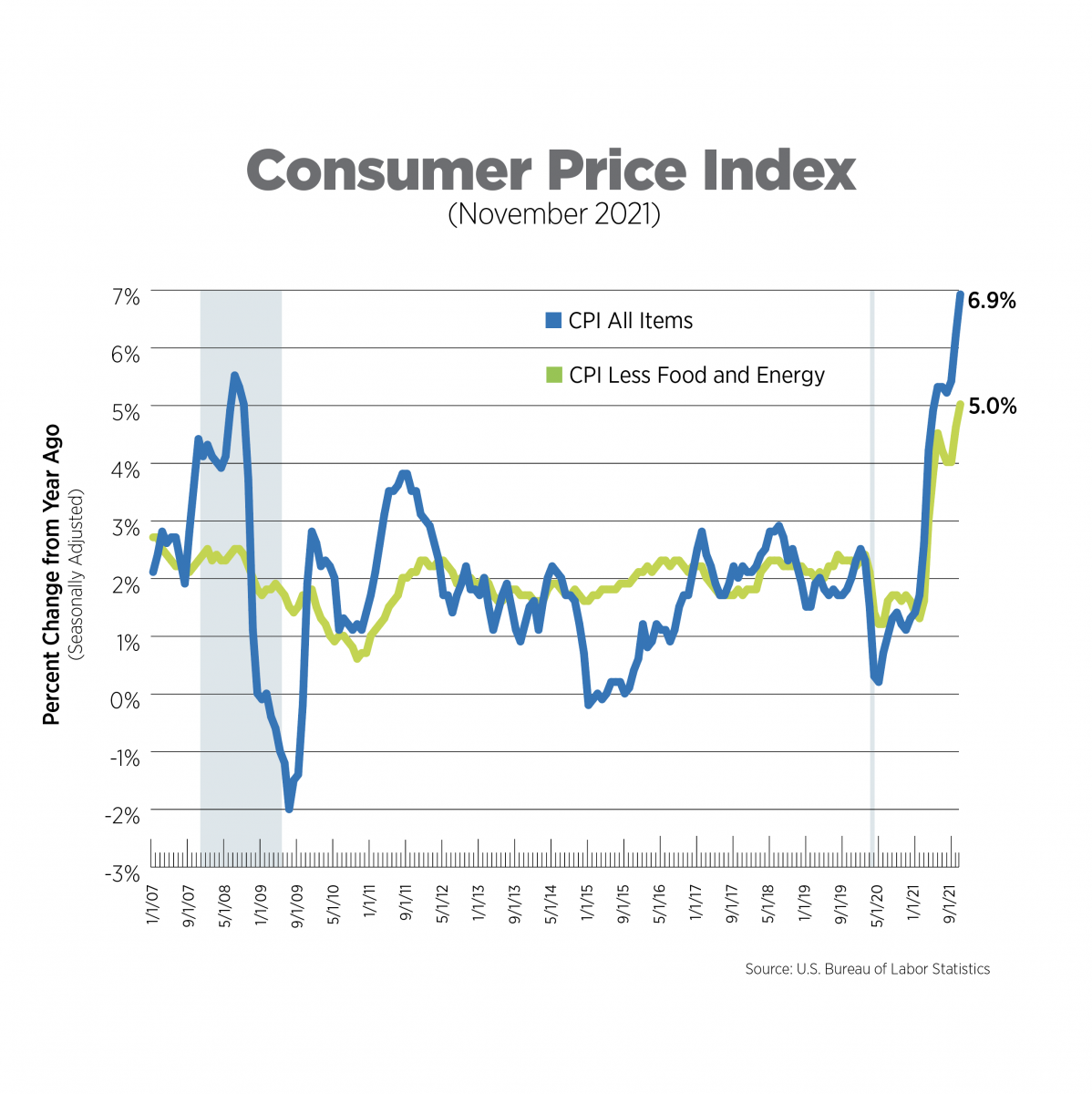 We have examined several alternative measures of inflation in prior Inflation Trackers, but the Atlanta Fed consolidates all of them into an Underlying Inflation Dashboard, updated monthly.  No matter which measure of inflation one thinks does the best job assessing underlying inflation, they are all above target as of October, contributing to the Fed’s decision to begin tightening monetary policy by lowering the amount of bond purchases it makes on the open market. 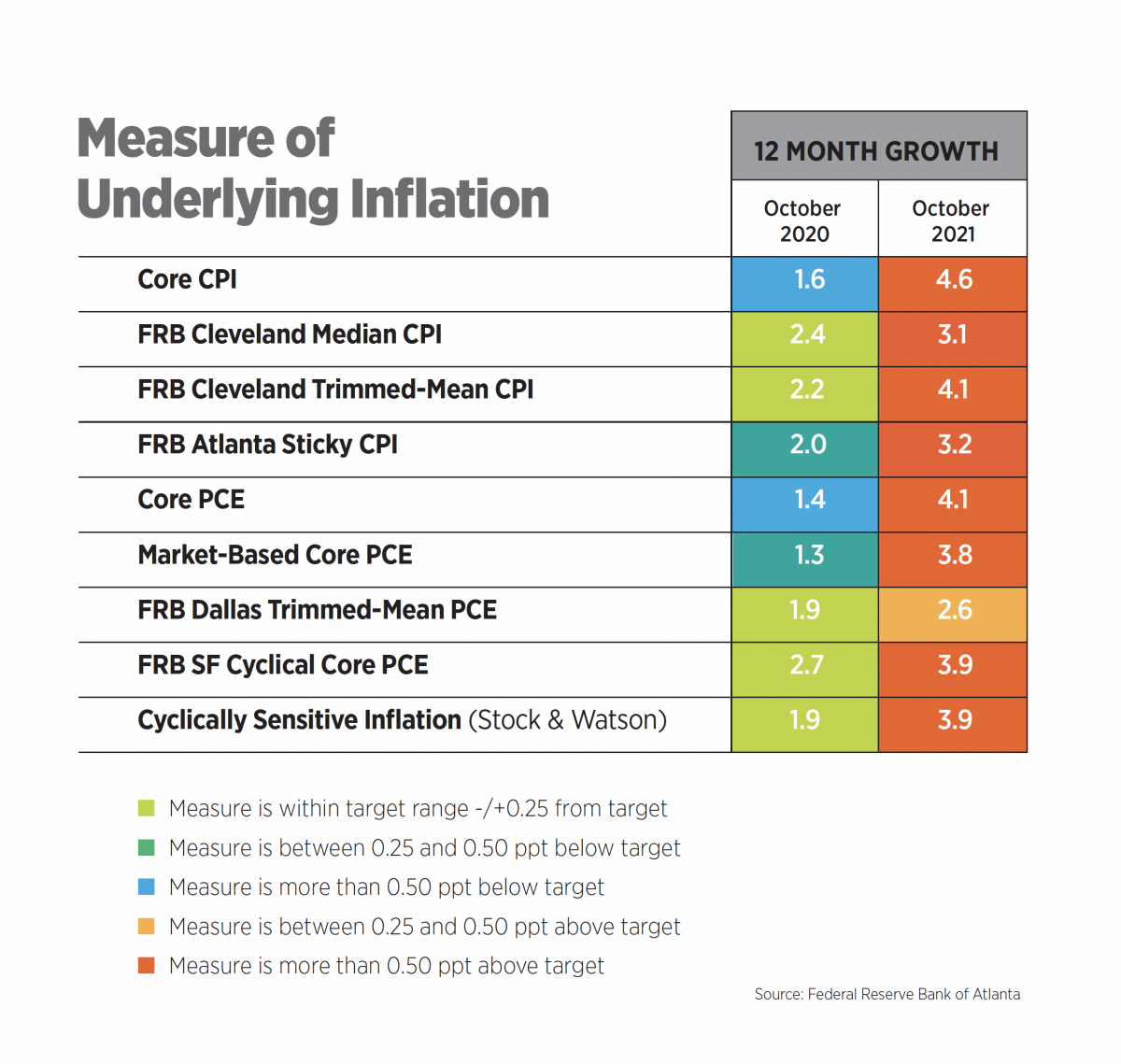 In October, core PCE increased 4.1 percent year-over-year, marking the seventh consecutive month the measure has been above the Fed’s target.  Motor vehicles and parts prices were a major component of the increase, rising by 2.7% in the past month alone. The overall PCE increased 5.0%, mainly driven by energy prices. The release of 50 million barrels of oil from the U.S. Strategic Petroleum Reserve should help put downward pressure on gasoline prices in the coming months. 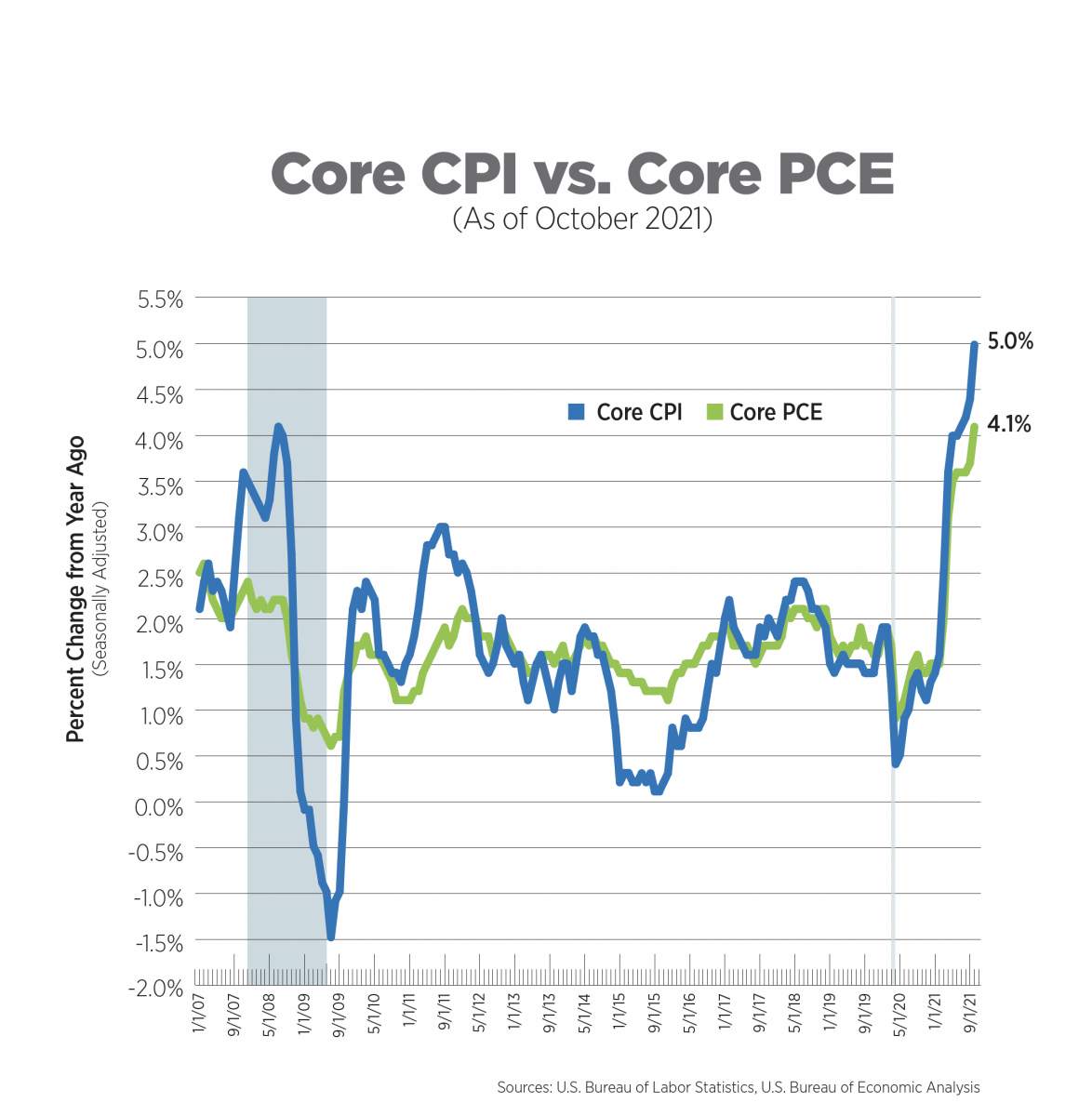 Breaking out inflation by goods versus service price increases clearly displays the stark reality of supply chain disruptions and post-pandemic demand for goods.  In November, prices for durable goods were up nearly 15% year-over-year, while services prices increased a more modest 3.8% - elevated, but in line with the 2008/2009 recession.

While no one knows for certain when pressures on the global supply chain will ease, the International Monetary Fund’s baseline forecast calls for shipping delays, delivery lags, and semiconductor shortages to improve in the second half of 2022. More optimistic forecasts project supply chain improvements by the end of Q2 2022. 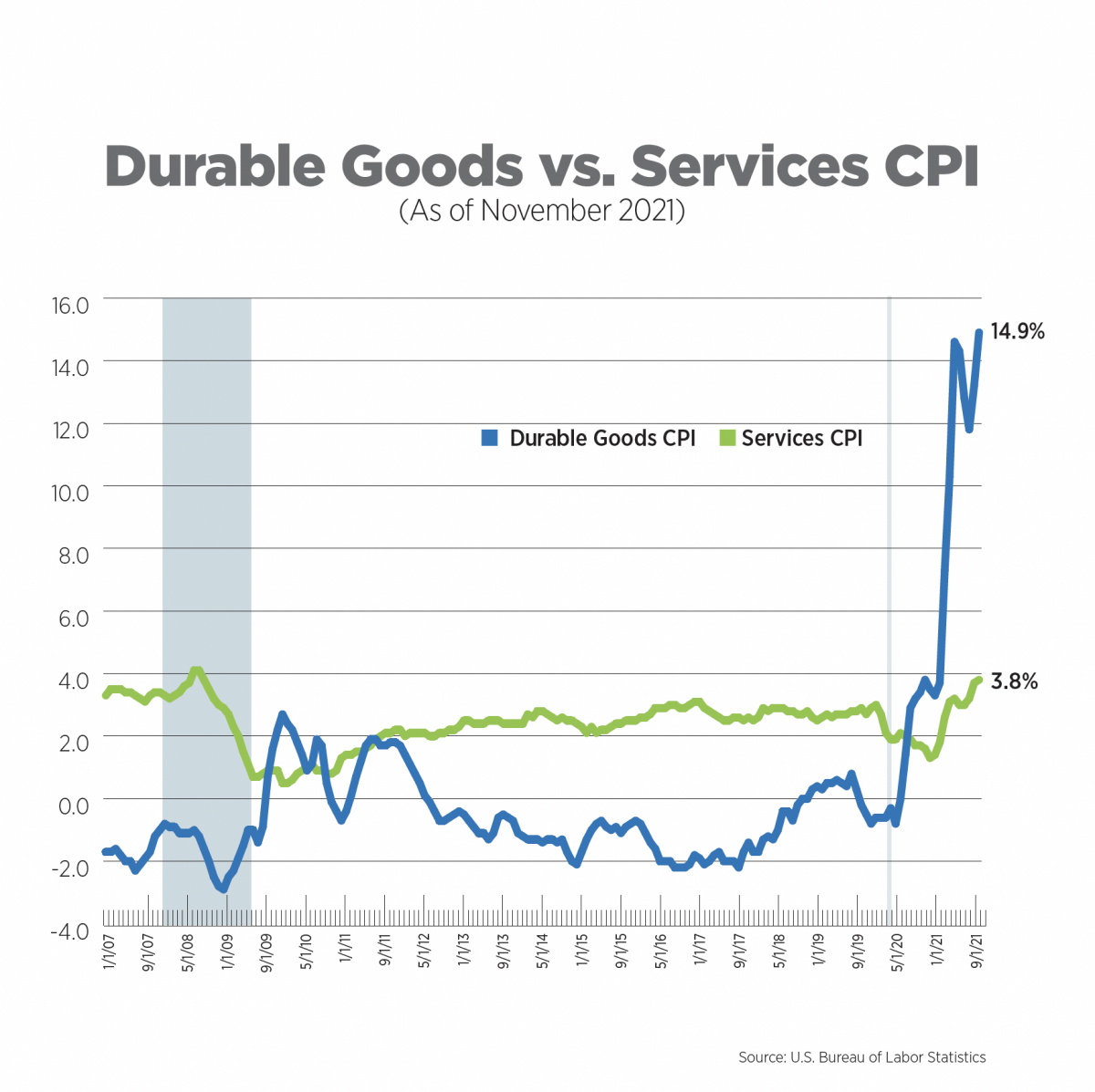 Wage growth held steady at 4.8% year-over-year in November, which marked the 5th consecutive increase above 4.0%. Gains were broad-based across industry sectors, but leisure/hospitality once again led the way with a 12.3% increase. Wages in the transportation/warehousing sector were up 6.8% while professional/business services rose 5.8%. With job openings remaining near record highs and businesses continuing to report difficulties hiring, wage growth can be expected to remain robust in the coming months. 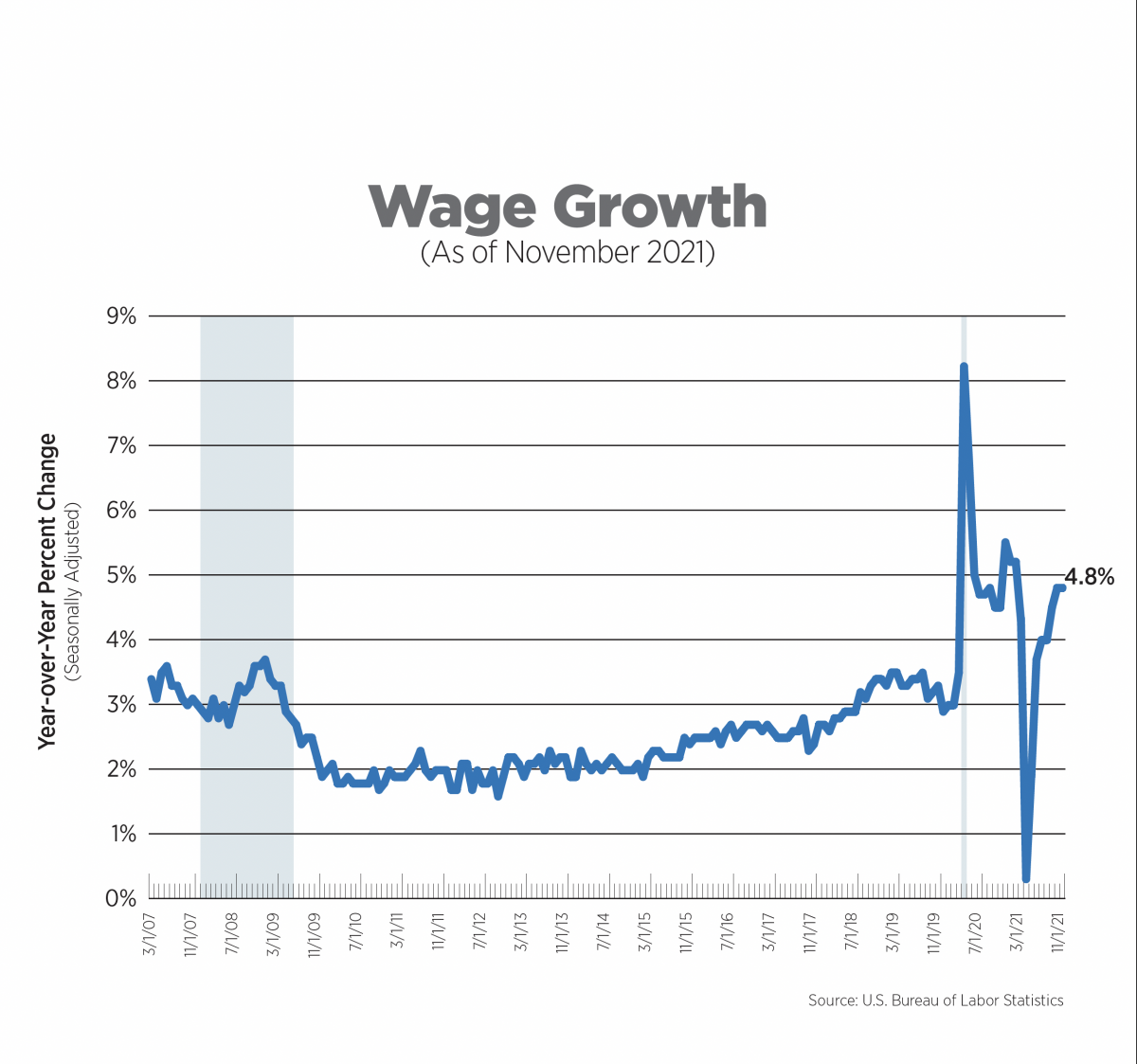 The Fed meets this week and an announcement is expected that the central bank will accelerate the tapering process from the initially stated $15 billion per month. If the Fed were to double this pace, bond purchases would end sometime in the Spring, leaving the door open for interest rate increases to arrive sooner than expected.

The Fed has been quick to point out that the end of the tapering process does not signal an imminent interest rate increase.